In the first of this series of articles, I would like to talk about how I decide on the final composition of an image.

The term composition refers to the arrangement of elements in a particular image. In essence, composition is defined by decisions we make at all stages of the image process. In this article I will make reference to one particular image in my collection, "Fleeting Illumination", as an example of how I composition an image from conceptual stage to the final crop.

This photograph was taken just outside ‘Glantenassig Forest’, not far from Castlegregory in County Kerry. It was taken at 11.59 in the morning at the end of a long mornings shoot around Brandon Bay. The weather that morning was perfect, but there were dark ominous signs of rain looming over the horizon. After driving for a couple of miles up a narrow windy road, I was presented with the scene you see in the photo. I could see straight away, even from the car, that the tree in the foreground was going to be the focal point for my composition, with the backdrop of the mountains. With the concept of the image firmly pictured in my head, I set about turning my concept into reality. 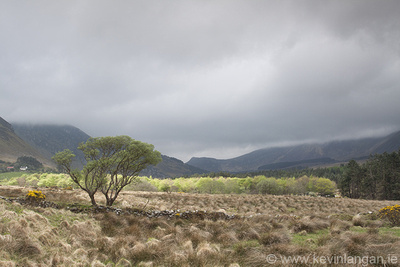 When photographing a scene like this you have certain restrictions imposed on you by the aspect ratio of your camera sensor, the lens you are using and the position you take up. A standard DSLR camera records images at an aspect ratio of 3:2. The lens you are using determines how much information you expose to that 3:2 ratio sensor and position you take up is often determined by physical elements in the landscape. Of course, if you are stitching a number of images together then you will have a lot more scope, but for this article I am only going to talk only about a one frame exposure.

Given the aspect ratio of your cameras sensor, your chosen lens and the position you take up, you are going to record a particular amount of information subjected to these parameters. In the unprocessed RAW image of this scene, half of the image is devoted to the sky, yet in the final photograph most of the composition is devoted to elements in the bottom half of the photograph. My point here is that, it is vital you record all the elements you think are important in a scene. My priority when taking this photograph was to capture enough space to the left of the tree in the foreground, and enough space to the right of the tree and I didn’t really care too much about what was going on in the upper part of the photograph. As long as I got in all the elements I wanted,I was happy.

Giving yourself a bit of extra scope is always a good policy when taking a photograph. In the unprocessed image you can see that I have included the house to the left of frame, and the evergreen trees to the fight of frame, yet in the final image I have cropped them out. By doing this I have given myself the option of cropping later. The more information I include at the capture stage the more scope I have later in post-production. That being said you are losing resolution by doing this, but I would prefer to have the option to crop later, than not have all the information I need to make a successful photo.

I would like to talk a little now about how I approach producing a balanced composition. As I mentioned earlier the first compositional tool I use is my brain. Approaching any scene I try to visualize how the final print will look, in particular what aspect ratio will suit the scene, what is the best angle to photography the scene; what is the most suitable lens to use; how the light is effecting the scene. So a lot of decisions are made before I ever touch the camera. My next move is to look through the viewfinder, hand-held, to refine my composition before setting up my tripod. Once I have mounted the camera on the tripos I always switch to ‘Live Mode’. Live Mode is one of the great advancements in DSLR’s, allowing you to see in real-time what is being framed by your camera. I have set up the LCD on my camera with a visible grid, dividing the screen into nine equal division. The horizontal and vertical lines on this grid intersect at four points and positioning key points on interest on these intersections will help give you a balanced composition. This theory of placing points of interest on these intersections is called the ‘Rule of Thirds”. Studies have shown that when viewing images, people’s eyes usually go to one of the intersections points rather that the centre of the shot. Using these intersection points on the back of your LCD is always a good start in sound composition and one I use continually. 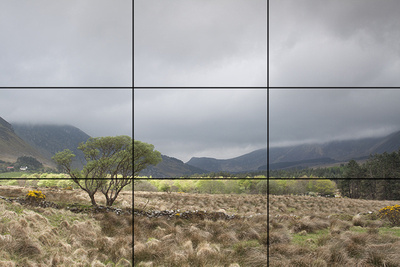 Apart from the ‘Rule of Thirds’, natural lines in the landscape also play a major part in defining how I frame a picture. Using natural lines can be a very effective way of drawing your eye to focal points in the picture. In the example I have provided there are strong natural lines made by the stone wall in the foreground, the line of the tree tops in the mid-ground and the converging lines of the mountains in the background. Given that we read imagery in Western society from left to right, these strong natural lines direct your eye across the picture. As our eye moves across the image, it is held briefly at the large tree in the foreground, before moving on again to the right, before being stopped again by the converging lines of the mountains in the background. These converging lines act as a holding point in the back centre of the frame. Picking up on natural lines in the landscape can help improve how the viewer experience the picture. They can be a very useful tool in directing the viewer around the picture, providing points of interest, or acting as holding points for the viewers gaze.

The final phase in defining the framing of the picture is done in post-production. I spoke earlier about giving yourself a bit of lee-way when taking the photo, so you have the option of cropping some of that information later in Lightroom of Photoshop. I usually do my cropping in Lightroom before I make any other adjustments to the image. I usually take a considerable amount of time deciding on the perfect crop for the image. Deciding on which elements to exclude in the composition can be a difficult task, but getting the crop right is a major determining factor in the success of an image, so time spent here is time well spent. Given that the aspect ratio of the full framed photo is 3:2, I chose to crop this image at an aspect ratio of 3:1 to give me a print size of 30”x10”. Cropping the image to this aspect ratio allowed me to get rid of a lot of the unwanted sky in the picture, focusing attention on the lower part of the composition where all the visually interesting elements are.

I conclusion, determining the final composition of an image relays on a number factors, from conception to the final crop. All the step and principals I have mentioned in this article are all part of how I approach composing a landscape image and I hope these principals will help you in your quest for compositional harmony.

I hope you found this tutorial helpful. Please let me know your opinion by adding your comments to my guestbook.