A Histogram is very useful tool for photographers and one of the great advantages of shooting digital. The cameras histogram is a great learning tool and gives you instant feedback on your exposures. It can be viewed in “Live Mode”, if your camera has such a function, or after you take the shot, so you can learn what work’s and what does not. Most modern day digital cameras, including point-and-shoot cameras have the option of displaying a histogram on the LCD screen, so if you have this function on your camera, I recommend you turn it on.

The Histogram is a graphic representation of brightness (or luminosity) levels of an image. Its mountain range shape is determined by what you are photographing, so there is no ideal structure to a histogram. The histogram uses a linear scale with 255 levels of brightness; black is valued at 0, while white is valued at 255; all other grey tones are represented between these values. The horizontal axis represents the brightness of the tones, while the vertical axis shows the amount of each tone at that brightness value.

The overall shape of a histogram can vary dramatically. In fig. 1 you can see an image with high contrast, meaning the tonal range of the image extends the full range of the brightness levels, from black to white, with the highest distribution of tones just left of centre. While in fig.2 you can see an image with low contrast, meaning the image only has a small range of tonal values distributed around the middle of the histogram and not extending all the way to the left or fight. My point here is that there is not ideal shaped for a histogram, it’s structure and tonal distribution is determined by what you are photographing and the exposure settings you set on your camera. 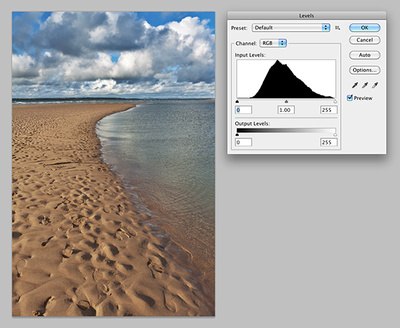 Depending on your camera, histograms can be displayed in two modes; brightness or RGB Mode. Your camera sensor records three monochrome versions of the same image, red, green and blue and combines all three to make the final image. Brightness histograms, also known as luminosity histograms, represent an average of those tones values, so they don’t give you a comprehensive story of what you are photographing. Setting the histogram to RGB mode is highly recommended. Viewing each channel individually will allow you to see if any of the three channels are being “clipped”. Clipping happens when either the tonal values of a scene exceed the capabilities of the cameras sensor (dynamic range), or the exposure is incorrect; extending beyond 0, all that information will be registered as black, extending beyond 255, all those values will be absolute white. The critical thing for which histograms are helpful for is to determine if the image is overexposed or underexposed. If the image is overexposed (fig. 3), you will see a bunching effect at the right-hand side of the histogram; if the image is underexposed (fig.4) you will see a bunching effect at the left-hand side of the histogram. If the histogram extends beyond these points “clipping” will occur. Clipping an image is something you really want to avoid when taking an exposure, as flat areas of black and white look terrible in any photograph, well colour photographs anyway.

Exposing to the Right

The image sensor on your camera is made up of light sensors that record brightness levels in red, green and blue. These sensors vary in their sensitivities to record light at all levels; they offer more sensitive near the highlights rather than the dark areas. In effect, this means that the camera sensor can record far more information in the brighter parts of the image than in the darker areas. In order to get the best out of a particular image, it is best to expose to the right-hand side of the histogram if you are shooting in RAW. Overexposing the image without ‘clipping’ or ‘blowing’ highlights is an effective was of getting the most out of your cameras capabilities. Doing this will minimize noise (flecks of random color in a portion of an image that should consist of smooth color) that can occur in the darker tonal areas of an image, maximizing the potential of you cameras sensor to record far greater tones. An image exposed to the right will look a bit washed out, but you can easily adjust the exposure later in your preferred post-production software to look right.

The histogram is a very useful tool in digital photography. It will assist you in capturing proper exposures, maximizing the potential of your cameras sensor and avoiding loss of vital information in the shadows and highlights of you image. Using the histogram to get instant data on an exposure is one of the great advantages of digital photography.  As I mentioned earlier, if your camera has a histogram, turn it on and take control over your exposures.

I hope you found this tutorial helpful. Please let me know your opinion by adding your comments to my guestbook.