A lot has changed since I was in Paris over a decade ago. Not in a physical sense, but more in human terms, specifically the growing obsession with self.

Being an observer of life and a documenter of the surroundings I find myself in, I am always curious about human nature, in particular how people act in public spaces and the trends they follow.

One of the big trends since the invention of social media like Snapchat and Instagram has been the selfie. The selfie is nothing new, it has been around since the 15th c if you consider self-portraits painted by artists selfies. Fast forward to the mid 19th c with the invention of the camera and the development of the 35mm system in the early 20th c, capturing a perfect likeness of ones-self became a lot more accessible. In recent times digital cameras especially camera phones have made it even easier, with dedicated lenses at the front of the phone for selfies.

As a child my mother owned a twin lens reflex camera, which I believe she got a present of in the 60’s. All our childhood photos were taken on this camera, the usual family snaps on our holidays and family events. Never once was the camera turned on the person holding the camera for a quick selfie. On one hand, this would be very difficult given the viewing mechanism on this type of camera; it wouldn’t have been impossible, but the notion would never have entered our heads at the time. Fast froward to today with the proliferation of cameras, especially smart phones, everyone takes selfies, some more than others. 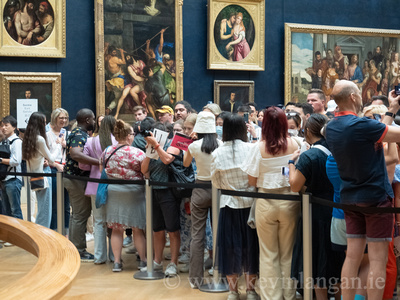 Selfie with the Mona Lisa, The Louvre, Paris

In the early 1960s Andy Warhol was an early exponent of the selfie. Warhol took a vast number of self-portraits, including photographs, silkscreen prints and  Polaroid prints. In early 2014, Huffington Post reported that Andy Warhol is “The Original King of Selfies.” Warhol was well aware of the vehicle that drives celebrity, that being the photographic image. While living and working in New York, he began a series of portraits of celebrities including Marilyn Monroe, Elizabeth Taylor, Elvis Presley and Jackie Kennedy. Warhol took images of these celebrities from magazines, newspapers, or directly from publicity photographs. This meant he could reproduce images already in the public eye, such as publicity shots or tabloid photographs. The technique also allowed him to easily produce multiple versions and variations of the prints.

Warhol was one of the first artist to draw attention to what fame is. Warhol said,"In the future, everyone will be world-famous for 15 minutes." Never has this statement been so true than today. Social media has provided us with a platform for that 15 minutes of fame, an easy vehicle to distribute the selfie in a number of poses and locations. Warhol was well aware what makes people famous, taking pre-existing photos of celebrities, enlarging and multiplying them and altering their colour, he not only made unique art form out of them, but he also attributed to the act of celebrity. 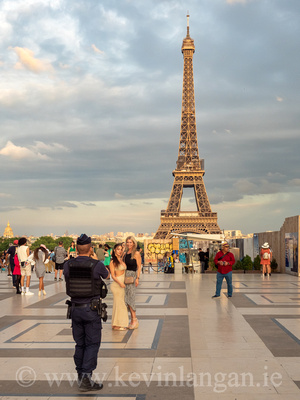 The very nature of celebrity has changes has changed since I was a young man growing up in the 70’s and 80’s. Before the advent of the smartphones and the social media, celebrity was primarily the domain of the entertainment and sport industry. To become a celebrity you had to have a skills as an actor or a sport star for instance. In today’s media saturated society the act of creating celebrity is much more accessible for everyone. Young people especially have coped-on to the fact that fame can be attained without any talent or skill; all they have to do is present themselves in environments and situations that promote the idea that they are leading an exciting glamourise life, just like the influencers they follow on social media. That 15mins of fame that Warhol predicted is now more than every attainable for anyone with a smartphone.

I first really started to notice the selfie in 2015 on a trip to Brussels. There, I say my first selfie stick in operation in the Grand Place with two tourists taking photos of themselves with the backdrop of some impressive Gothic and Baroque buildings. Since that time I have taken an interest in the selfie culture and have often taken photos of selfie takers in the streets around Europe and further afield. On my recent trip to Paris I saw the selfie go from a casual snapshot of oneself on location, to a considered and much more purposeful activity. The act of posing among young girls and not so young , not just once, but multiple times, with a backdrop of importance both visually and contextually seemed the norm. Around the usual tourist attractions like the Eiffel Tower, The Louvre, etc.,  I witnesses a plethora of girls, dressed to the nines getting their photo taken with these impressive structures. Nothing new about this, but some of these girls had a series of outfit and a range of accessories for their ‘fashion shoot’. I also came across several young girl, no older than 16 being photographed by their mothers, some more scantily dressed than others. 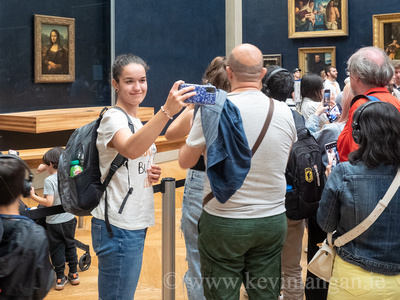 Selfie with the Mona Lisa, the Louvre, paris

Even the galleries did not escape the act of selfie taking. In The Louvre, Musée d'Orsayand the Pompidou I witnessed the act of selfie. One particular woman in her 40’s accompanied by a young man with blue hair whisked around from painting to painting without actually looking at the work, or knowing who the artist was to take selfies of the woman with the painting as the backdrop. I observed her for a while and noticed that she must have taken a selfie with every know artwork in the gallery. It was ridiculous to watch and highlighted the absurdity of the selfie culture. Having paid the price of admission surely you would invest time in looking at the artworks and trying to learn something about the artists. All this didn’t seem to matter to this woman, all she wanted was an interesting background for her ‘duck face’ selfies.

It seems like the experience of the tangible physical world doesn’t seem to be as important to some people anymore. Our lives have become more and more digitised and we are at the mercy of likes, comments and emojis.  What happens outside the realm of Instagram, Facebook and YouTube doesn’t matter as much as having a million followers and an online presence. The selfie will always have its place in society, but hopefully too does the real life self!