Recently I had the pleasure of visiting Iceland, a land that has intrigued me for a number of years now, with its volatile volcanoes and glacial-shaped landscape. Accompanied by two close friends, our trip to Iceland lasted ten days in all, covering over 3,500 km, on a journey that took across the south coast of Iceland. On the way we encountered huge waterfalls, beautiful snow capped mountains, powerful glaciers, iceberg filled lagoons, black sandy beaches, a myriad of birdlife, volcanoes, geyser's, and a landscape reminiscent of the moon.

Having driven over five hours due east from Rykjavik, we landed at our accommodation for the first leg of our journey, Guesthouse Hali. Situated just ten minutes from a spectacular Jökulsárlón glacial lagoon, Guesthouse Hali proved to be an ideal location to base ourselves as we explored the lagoon and the surrounding area.

Jökulsárlón is a large glacial lagoon situated at the head of the Breiðamerkurjökull (jökull is glacier in Icelandic). Its very existence was caused by the receding glacier that once stretched to the ring road (Route 1), but now lies approximately 1.5 km away from the oceans edge. It is also the deepest lake in Iceland at 248 meters. 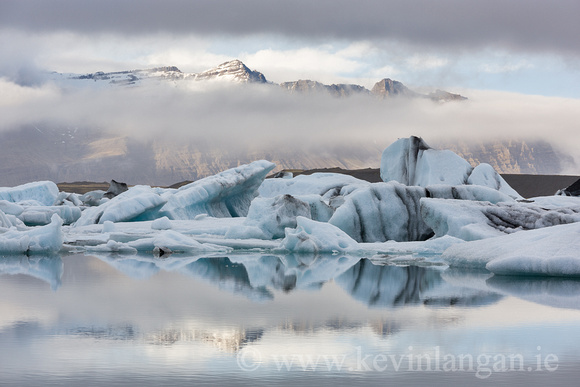 I'm sure the first sight of Jökulsárlón has the same effect on everyone else as I did on us. Catching a glimpse of the lagoon in our peripheral vision as we drove along Route 1, we instantly hit the brakes and pulled in off the road to gape, with mouths open at the surreal sight before our eyes. Never before have I come across a natural spectacle of such beauty, enormity and might. To top things off as soon as we arrived conditions for photography were perfect. With a spectacular snow capped mountain backdrop, low-lying clouds, and a surreal foreground full of huge floating pieces of ice, it was hard not to produce good photographs. Having stayed there for some time exploring the lagoon from a variety of angles, we eventually dragged ourselves away to check-in to our new digs before making a return later that night. 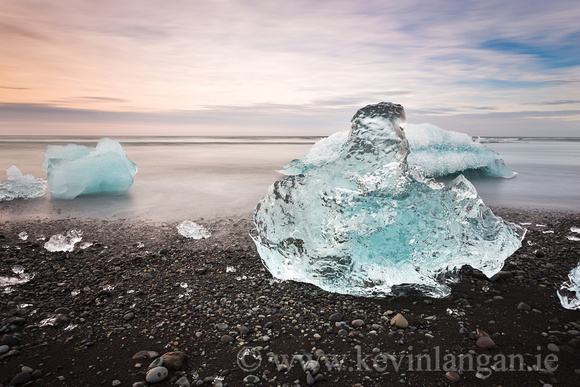 Over the three days we stayed in the area, I made four more visits to the lagoon to photograph the floating icebergs under different lighting conditions. Early morning and late evening gave the greatest rewards in terms of light, but also allowed me to experience the lagoon undisturbed, with little distraction apart from the odd Skua and seal.

I also spent some time on the beach at the outlet of the lagoon, photographing the broken pieces of icebergs washed up on the shore. The black sandy beach created a good contrast against the ice white of the icebergs. The dynamic there was a lot different from the lagoon area. There was a constant conveyor belt of ice coming from the lake, which was being battered by ocean waves as they makes its way out of the inlet. These large pieces of ice would eventually be washed up on shore and strewn all along the beach. There were a lot of seals in this area, waiting for fish as they entered and exited the lagoon. Seals have a stress free like there. With no predators around to eat them, they have easy pickings of the ample fish the lake.

Jökulsárlón is one place I don’t think I could ever grow tired of. It is a wild and wonderful place, full of natural beauty and dynamism. Luckily for us the time we spent there we were blessed with favorable weather conditions, which greatly added to our experience. Jökulsárlón had a profound affect on my travelling companions and me, and It is one place we won't forget in a hurry.

From our base near the glacial lagoon, we took a day trip to the ‘Skaftafell Ntaional Park’ to explore the Svartifoss waterfall, the Skaftafellsjökull glacier, and the surrounding area. 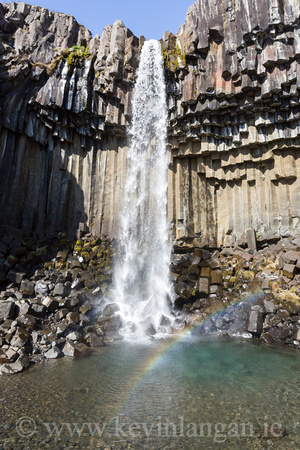 The Skaftafell National Park has many trails that can be taken to explore the surrounding landscape. Our first hike was to the ‘Svartifoss’ waterfall, a spectacular waterfall surrounded by hexagonal basalt columns. These hexagonal columns were formed inside a lava flow that cooled slowly giving rise to crystallization. The waterfall is well known in Iceland and is a popular destination for photographers and tourists alike. Having experienced the fall for some time, and having taken many photographs, we then hiked for a few kilometers to a high vantage point overlooking the Skaftafellsjökull glacier. The views from this vantage point were amazing, with a panoramic view of the glacial valley below and the impressive backdrop of the Hafrafell mountains in the distance.

After three days based near Jökulsárlón we moved camp to a village called Vík about two hours west of Jökulsárlón. Situated on the southernmost part of Iceland, Vík is the largest settlement for some 70 km. Despite its small size (291 inhabitants) it is an important service center for inhabitants in the surrounding area and visitors alike.

Vík is a great base to explore the coast around Dyrhólaey and Reynisfjara. On our first night in Vík we drove to Dyrhólaey, a small peninsula 10k west of Vík to photograph the lighthouse, the large puffin colony, the impressive sea arch, and the dramatic views from on both sides of this impressive promontory. 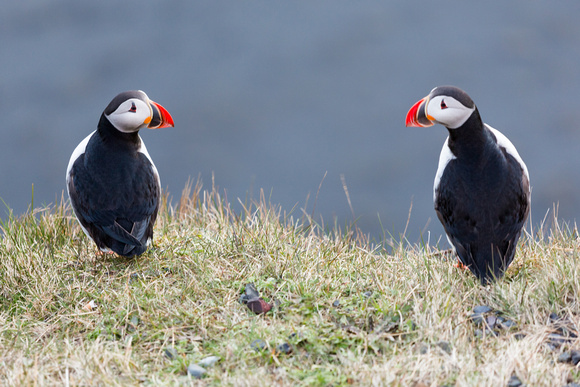 Reynisfjara beach also had a lot to offer. Immediately offshore are sea stacks of Reynisdrangur projecting out of the sea like giant stalagmites. The cliffs along the beach feature stacks of basalt columns, caves and plenty of bird life. Puffins nest in these cliffs, and I had to duck a few time to avoid them hitting me as they made their way out to sea to fell their bellies.

On our fifth day in Iceland we took a ferryboat to Vestmannaeyjar (Westman Islands), an archipelago off the south coast of Iceland. The islands are named after the Irish (Westmen) who were captured into slavery by the Norse Gaels. As the story goes, shortly after Ingölfur Arnarson arrived in Iceland, his brother Hjörleifur was murdrred by the Irish slaves he had brought with him. The Irish slaves then fled to Heimaey, but Ingolfur hunted them down and killed them all.

The area around Vestmannaeyjar is volcanically active, with two major eruptions in the 20th century. The eruption in 1963 created the new island of Surtsey, and the Eldfell eruption on Heimaey in 1973 created a 200m high mountain where a meadow had been, and the temporary evacuation of the towns 5000 inhabitants. Heimaey is the only inhabited island with a current population of 4,135, with most of the people living off fishing. It is densely populated with over four thousand people living on 13.4 km² of land.

Having spent the day on the island exploring the sights, Eldfell was the highlight for me. Not only the fact that a recent eruption had occurred here, but the landscape is totally surreal, with colours straight out of a science fiction movie.

Pórsmörk or more commonly called Thórsmörk, named after the mighty pagan God Thor, is a natural oasis that lies behind the now fameous Eyjafjallajökul volcano which erupted in 2010 (the one that stopped all the air traffic).

Pórsmörk is only accessible by 4X4 on a dirt track, F249. To get to the land behind the glaciers you have to cross numerous un-bridged glacial streams, some of which are quiet deep and with strong currents. The valley itself is beautiful, with weird rock formations, ice-capped mountain on either side, and icy streams running all along the valley floor.

Having crossed many glacial streams we finally made it to our destination Basar, a very scenic area about 30 km inland from the ring road. From there we hiked up Mt Réttarfell, a 509m high mountain with fabulous views of the valley below as well as the surrounding mountains. The climb itself was a bit hairy in places, but the view from the summit was well worth the risk.

On the way back, the glacial streams we crossed earlier with ease, had grown in size due to the melt waters flowing from the surrounding mountains. Luckily for us they were passable with our Suzuki Grand Vitara, which proved to be a good mode of transport both on and off road. The glacial rivers of Pórsmörk can be a unpredictable and the fords change constantly as the day progresses.

The last leg of our journey took us to two of the most popular tourist attractions in the country, Gullfoss (Golden Falls), and Geysir (spouting hot spring), which form’s part of the Golden Circle including Pingvellir National Park.

Although these attractions are generally thronged with tourists, given their close proximity to Rykjavik, they are well worth the visit. Our first stop was at Geysir. Geysir, sometimes called 'The Great Geysir', was the first geysir known to modern Europeans, and the first to be described in a printed source. Despite its celebrity, Geysir eruptions are infrequent, relying on its neighbor Strokkur to put on a more frequent show for visitors. Watching these hot water explosions shoot up into the air is mesmerizing. One waits in excited anticipation for the next violent eruption of hot water, which can shoot up to 40m in the air.

Next up was the magnificent Gullfoss, Iceland’s most famous waterfall. Gullfoss is a double cascade, dropping 32 meters, kicking up a sheer wall of spray before thundering down a narrow ravine. 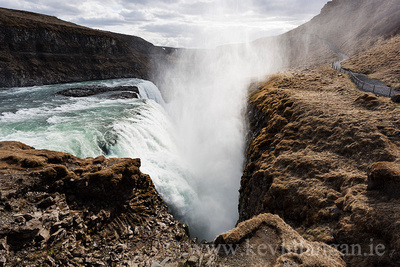 Gullfoss is the largest most beautiful waterfall I had seen in Iceland, and believe me, there were many. This spectacular waterfall must be the most photographed natural phenomenon on the island, with good reason. Its scale, power, and beauty are enough to transfix one into a giddy state of excitement, as one searches for the best vantage points to view the falls. Despite how busy the place became while we were there, it didn't take from the experience. Every now and again us loner landscape photographers like to make contact with our own species, even if it is only for a short time.

Iceland is a magical country. Its allure is obvious to anyone who has interest in the natural environment and is a Mecca for landscape photographers. The landscape is vast, varied, rugged, beautiful and alive. Every turn you make, there is a view more impressive than the last. Beautiful waterfall's are around every bend, huge ice-capped mountains dominate the skyline, volatile raging rivers crisscross the landscape, geyser's and hot springs bubble with energy, and the threat of a volcanic eruption is ever-present. Iceland is truly a land of fire and ice, a land that seem more alive than any I have visited.

My time in Iceland will remain long in the memory. Its had a profound effect on me, enough to make me want to return to capture more of what this wonderful country has to offer.