Recently I took my first trip to the Aran Islands after visiting north Clare to photograph the Burren. Having decided on visiting Inisheer (Inis Oírr, meaning 'east island') the smallest of the three islands, I set sail aboard the 'Happy Hooker', a boat owned by the Garrihy family, who have been running trips to the Aran islands since 2000.

The landscape of Inisheer is the same as the Burren in County Clare. Karst limestone is the bedrock that forms the island. The limestone dates from the Visean period, formed as sediment in a tropical sea some 350 million years ago. Through later tectonic forces, this terrain was later raised above sea-level where it was sculpted by the elements including numerous ice ages. The island is roughly 3km by 3km wide, with small hills and intricate little valleys easily covered by bike or on foot. It has a population of 250 and is one of the strongest Gaeltacht areas in Ireland. 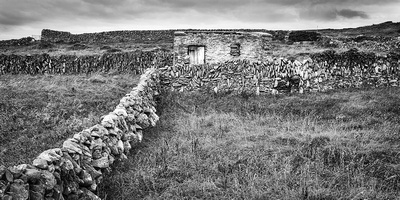 Having arrived on the island, I headed for the nearest pub for a cup of tea and a scone to fuel my body for the adventure ahead. Most of the other 'tourists' had the same idea and soon the pub was full. After acclimatizing to dry land again, I set of towards the beach to hire my mode of transport for the day, a push bike. Even though the island is relatively small, a bike is a good way to see the island in a time efficient manner. Having paid for the hire of my bike I headed east towards my first port of call, the 'Plassey' wreck on the eastern shore. 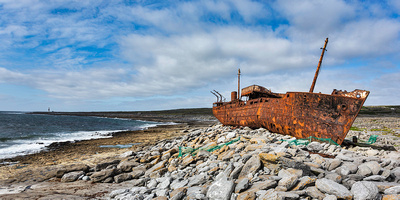 The Plassey was a steam trawler beached on the island in 1960. It was built in 1940 and named HMT Juliet in 1941. She was renamed Peterjon in 1947 and converted to a cargo vessel. In 1951 she was bought by the Limerick Steamship company and named the Plassey. On the 8 March 1960, she was caught in a severe storm while crossing Galway bay and ran aground on Finnis Rock, Inisheer. All eleven crew were rescued by locals, but the Plassey would never sail again after being washed ashore after a second storm hit the island several weeks later. If you are familiar with the television comedy series 'Father ted', you will get a glimpse of the Plassey wreck in the opening credits.

From my research I knew the wreck would be best photographed in the early morning light, with the sun illuminating the starboard side of the ship. As I arrived at the wreck I could see that conditions were perfect for photography. The sun had emerging from behing the clouds and it lit up the Plassey life a spotlight. I explored the wreck from every angle and made several exposures. 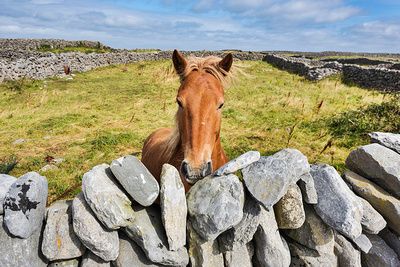 Having photographed the Plassy for some time I set off again towards the lighthouse, stopping off on the way to take photos of sheep and horses encased in the majestic limestone walls that are ever-present on the island. Away from the shoreline the landscape of Inisheer is dominated by limestone. Every scrap of land is divided up into tiny plots of varying degrees of vegetation. What greenery there is has been hard earned over the years as generations of farmers mixed seaweed and sand on top of rocks to create fertile soil. 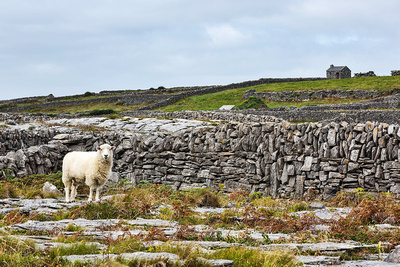 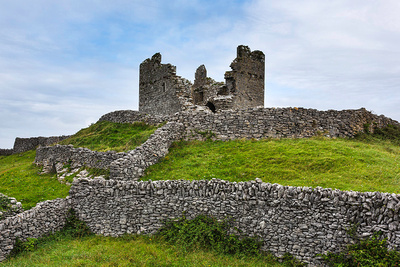 After exploring the east side of the island I headed inland to visit O'Brien Castle, a 14th century castle that sits inside a prehistoric ring fort on the highest point on the island. During the Medieval period, the Aran Islands were strategic in controlling Galway Bay. From as early as the 13th century, there are records of payement's of large amounts of wine by Galway City to the O'Brien clan to keep the shipping route free from piracy. 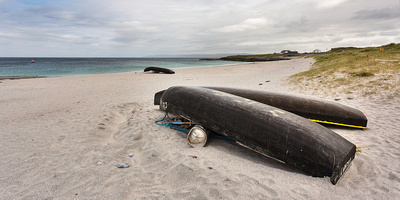 Having explored O'Brien's Castle for some time, I headed towards the north shore, to the small but beautiful white sandy beach facing clear crystal turquoise water. The beach is used by locals to bathe and is a good place to launch a currach. The currach is a traditional Irish vessel constructed of a wooden frame, over which animal skin or hides were once stretched. Today currach's are covered in canvas or calico and painted with tar to make them waterproof.

As I made my way from the beach towards the pier I got the alluring waft of burgers in the air. As I approached the proprietor of the burger shack I was amazed to hear an American accent asking if ' I would I like ketchup with that'. I'm sorry I didn't pry into the circumstances why she ended up selling burgers on Inisheer, but on reflection I can see the attraction. 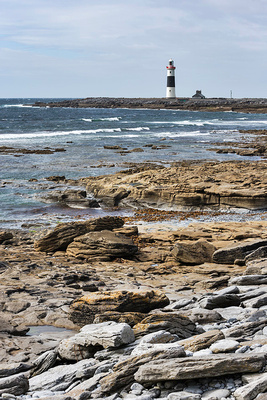 As I waited for my boat back to the mainland, I contemplated what it must have been like to live on the island in old days, when survival depended on the sea and what little produce the islanders could harvest from this soil starved land. It must have been a hard life, isolated in the middle of Galway Bay, subject to all manner of weather, dependent on their resourcefulness for life itself. The great writer  J.M. Synge visited the Aran Islands in 1898 for the first time, and would return for five consecutive summers, collecting stories and folklore for his first serious work, "The Aran Islands". It is a reflection of the lives of the Islanders that will give you a great insight into life on the Island in the late 19th century and early 20th century, one that puts my speculation into perspective.